A space strategy game made for Secret Santa Jam 2021.

You have 100 turns to build your empire and accumulate score. Each action is one turn.

Inspired by The Battle of Polytopia, Race for the Galaxy, and Master of Orion.

Really fun, would like if the score screen showed the scores of the other species, not random Oregon Trail style scores

Purifiers: I got the free probe research in early game. Then I got the bioship research, and luckily I found a few stashes of genetics. I invested all of them in my fleet, and then I sistematically probed all the systems and purified them. By turn 50 the galaxy was empty. Then I got the laboratory that gave +1 score per genetic research. I colonized as many genetic producers as possible, and launched genetic researches until the end of the game :) It was a very lucky run!

Uncaught ReferenceError: emp is not defined 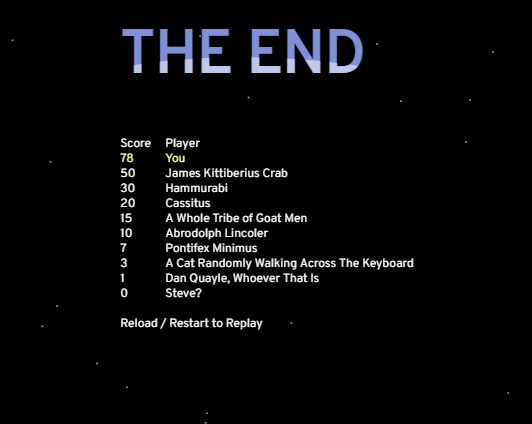 Niiice! What did you use to get that score?

I used the Golians. My strat revolved around doing research until I got either the resource reveal or war techs. After which I colonize as fast and hard as possible.

I got lucky that run and got universities as my first tech so I had high science production for my first planet.

I finished the game on turn 100 using the Genetic Ascendance.

Honestly have no clue if I could go higher but it feels like I only missed only a couple possible points.

I would give it a shot if there was no turn limit.

Uh the turn limit is kind of the point of the game.

Love the game! I do have a suggestion though, could you make an infinite mode? I'd love to see my space empire grow to ultimate power. Also, you spelled artifact wrong.

In space, your neighbours will speak British English...

Looks decent. Needs a volume control/mute button for the music.

Hello! I'm Carlitos from the Secret Santa Jam. I would like to personally thank you for the game you have made for me. The background music and sound effects were a nice touch to a simple, yet addicting game-loop. Thanks for the game and I would love to see you develop this more into the future!

Hey David, absolutely fantastic game and idea. I love the music. It reminds me a lot of "Seedship".

I sadly got a bug about 50 turns in where I clicked a system and the star is the only thing visible (of the galaxy screen). The UI has disappeared and I can't do anything.

If you pop up the developer console (ctrl-shift-J probably) there should be an error report. Send that to me and I should be able to fix the problem. :)

I got the same thing 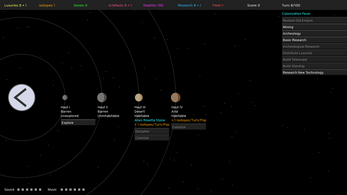